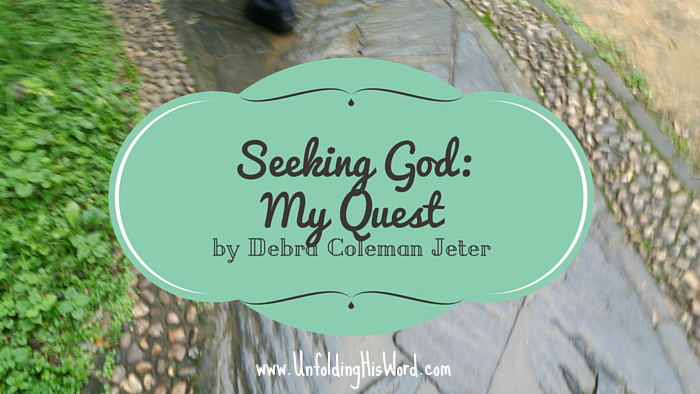 I was brought up in the church, and some of my earliest memories are of the little country church I attended as a small child with my parents and grandparents. I remember wondering if Jesus was present in the flesh behind the painting of him that stood above the baptistery. So you might think that my journey to faith would have been an uneventful one. This is not the case.

When I was eight, two of my friends and I went down the aisle to confess Christ during a revival meeting. I was baptized at that time. However, by the age of twelve, I had my first crisis of faith.

Both of my grandfathers had died by then, in their early sixties, leaving our family truncated. I didn’t understand why, and I couldn’t seem to resist wondering and asking. I saw others who suffered loss and seemed to accept it as God’s will without being troubled by doubts and questions. Why couldn’t I?

My paternal grandmother had a difficult time herself, and suffered a nervous breakdown when my grandfather became ill. This same grandmother had a strong faith, however, and eventually pulled through onto more solid footing. She was a big admirer of Billy Graham. I wrote Mr. Graham a letter expressing my own doubts, which I couldn’t find the courage to express in my church. That letter lay unmailed in the top drawer of my dresser for many years.

In college I studied pre-medicine for the first three years before changing majors. There I met my husband, who was studying wildlife biology though he switched to pre-veterinary medicine. He had his own struggles with faith, having a brother who was severely damaged by forceps at birth, resulting in cerebral palsy.

This brother-in-law, Terry, who died this year, could not feed himself, speak, or control his bladder or muscles. My husband always said he was probably the smartest one in the family. Yet, at his funeral, I realized that many people believed him to be mentally retarded, which was far from the truth. It had always pained me to see Terry strive to communicate using the best sounds and facial expressions at his disposal, knowing how frustrating it must be for him; and it pained me even more to think how often he’d been misunderstood over the course of his life on this earth. I could only imagine how hard it was for my husband.

By the time my husband was in veterinary school, my faith was weak. I went to church, but I struggled to believe. I was troubled by things I heard in the pulpit as well as things I read in scripture. I wondered how God could punish people in societies where they had never heard of Christ. I wondered how God could smile upon some denominations, as these early ministers seemed to believe, and deny others access to the pearly gates. I wondered why believing was so important to God, and why belief was so easy for some and so troublesome for me.

I initiated a conversation with the minister at my church in Columbus, Ohio, telling him my doubts. I longed for him to convince me, to help me, to work with me. But he never followed up on that conversation.

We moved to Indiana, and I sought the help of a minister there. He told me that there were other reasons for attending church besides faith—that many people attended church for social or business reasons. I did not want to attend church for those reasons. I wanted to believe!

While we were in Indiana, I experienced the miracle of childbirth. I was enchanted by the perfection of my daughter, and I felt closer to my creator (and hers) than I had in a long time. Before her first birthday, we moved back home to Kentucky. She and I began to attend a small country church, and the congregation, minister, and elders there were warm and welcoming.

When I was pregnant with our second child, we moved again, this time to Clarksville, Tennessee. The church I joined here, of which I’m still a member, had two ministers at this time, both named Mike: Mike Anglin (pulpit minister) and Mike Moore (education minister).

I learned a lot from both of these wonderful men. I learned that faith is not equivalent to belief, that faith is an active concept. I began to realize that I had been seeking God all my life and that, so long as I did not give up on Him, He would not give up on me. When Mike left, our current minister came to our congregation. I’ve learned a lot over the years from Geoffrey Sikes also. One of the messages I’ve heard him say repeatedly is that when it comes to the difficult questions that have troubled me so often, God will decide and God makes no mistakes.

With my four-year-old daughter and baby son in tow, I confessed Christ again on a weekday. Mike Anglin listened to my confession, and baptized me into Christ for the second time. God has blessed me richly, and I pray almost daily for him to strengthen my faith. I pray that I can understand the things I need to understand, and accept the things I cannot. He is so patient with me, and he keeps answering my prayers, though not always in the way I’m hoping for and not always as quickly as I’d like. But I believe He knows better than I do what I truly need, and when and how to meet those needs. 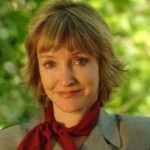 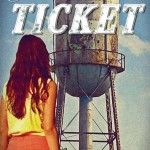 She is a co-writer of the screenplay for Jess + Moss, a feature film which premiered in 2011 at the Sundance Film Festival, and captured several international awards. She lives in Clarksville, Tennessee, with her husband.

Debra Jeter’s debut novel, The Ticket, is now available through Amazon, Barnes & Noble, and other outlets. Check out the book trailer here.