For Nothing Will Be Impossible With God 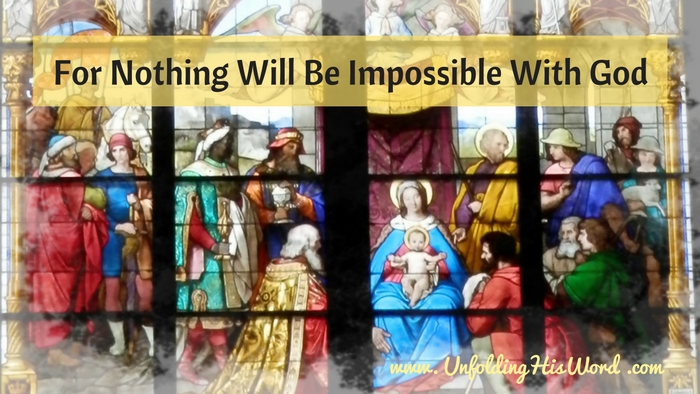 He and his wife prayed that God would grant them a baby. Months turned into years, which turned into decades. Each year that went by, more of the same. No pregnancy. No baby. Just the quiet lives of two people growing old together. Eventually, they accepted that they would never experience the joy of holding a newborn child or hear the laughter of their grandchildren. Time had passed them by. God had not delivered

Imagine Zechariah’s shock when the angel announced the coming birth of his son.

And there appeared to him an angel of the Lord standing on the right side of the altar of incense. And Zechariah was troubled when he saw him, and fear fell upon him. But the angel said to him, “Do not be afraid, Zechariah, for your prayer has been heard, and your wife Elizabeth will bear you a son, and you shall call his name John. (Luke 1:11-13)

Zechariah and his wife Elizabeth had prayed for a baby, and now the prayer was answered.

Unlike her cousin Elizabeth, Mary had not asked for a baby. She wasn’t even married. A young woman in Nazareth, engaged to Joseph—for her, babies would come with time, most likely. First the wedding, then the baby.

Imagine her shock when she got a similar announcement:

And the angel said to her, “Do not be afraid, Mary, for you have found favor with God. And behold, you will conceive in your womb and bear a son, and you shall call his name Jesus.” (Luke 1:30-31)

Although both Zechariah and Mary questioned the news they received, God heard different responses. One was the response of unbelief. The other, a response of faith.

And Zechariah said to the angel, “How shall I know this? For I am an old man, and my wife is advanced in years.” And the angel answered him, “I am Gabriel. I stand in the presence of God, and I was sent to speak to you and to bring you this good news. And behold, you will be silent and unable to speak until the day that these things take place, because you did not believe my words, which will be fulfilled in their time.” (Luke 1:18-20)

And Mary said to the angel, “How will this be, since I am a virgin?” And the angel answered her, “The Holy Spirit will come upon you, and the power of the Most High will overshadow you; therefore the child to be born will be called holy—the Son of God.” (Luke 1:34-35)

Zechariah questioned how God could perform something that was entirely contrary to the physical evidence. He was old. His wife was old. In light of the angel’s announcement, how could he “know this” and believe in the face of the facts?

Mary, on the other hand, didn’t ask how she could trust the message. Instead, she simply asked how God would accomplish this amazing feat given that she was still a virgin. Hers was a question rooted in faith.

In our lives, we face circumstances that look impossible. A broken marriage after years of trying to make it work. A lost child that you’ve prayed for without ceasing. A rising mountain of bills and a shrinking or empty bank account. All the physical evidence may suggest that no solution is forthcoming. The hurts are too deep, the loss too great, the debt too high. Maybe, like Zechariah, you’re convinced that time has passed you by.

While we can’t see the hearts of Mary or Zechariah, God knew that Zechariah’s question told of his unbelief, and God answered the question accordingly. God also knew that Mary’s question was a question of faith. She recognized God’s will, and asked how God was going to bring it to pass—a legitimate question.

Mary trusted God with her future. The coming Messiah was the answer to a long awaited promise of salvation and deliverance, and though she didn’t know exactly how God would accomplish the birth of her baby, she trusted that would do what he said he’d do.

The Reason We Trust

The same Messiah brings us the promise of salvation today. We don’t know how God can accomplish his will in and around us, but we know that nothing will be impossible with God. We can trust the Messiah to save us from the penalty of our sin by his death on the cross. We can trust him to save us from the power of sin as he intercedes for us with the Father. And one day he’ll save us from the very presence of sin when he takes us to home [1]. Like Mary, we can trust God with our future and respond, “Let it be to me according to your word.”

So which response will you choose? Will it be Zechariah’s response, as you point to physical evidence and ask how you can be expected to believe God, given the facts? Or will you choose Mary’s response, and simply ask how God will accomplish his will?

This Christmas, let’s choose the faith of Mary, for nothing will be impossible with God.

This article first appeared on Unlocking the Bible, 21 Dec 2016. Used by permission.